L. Barnett Evans' One Act play, Take My Hand,  enjoyed a successful run at the Indy Fringe Onyx Festival. Who knows where it will go from there.  Meanwhile,  Evans and Rhodes are  scouting locations for other exciting adventures  for the characters in our Grandmothers, Incorporated book series.

Recently, we had the pleasure of visiting Mackinac Island in Michigan, a picturesque island that can only be accessed by ferry or boats and on which the only motor vehicles allowed are for emergencies.  The major transportation on the island is by horse drawn carriages, bicycles or foot.  It's quite a charming place and a perfect setting for our ladies from. Grandmothers, Incorporated to  relax and get into mischief. 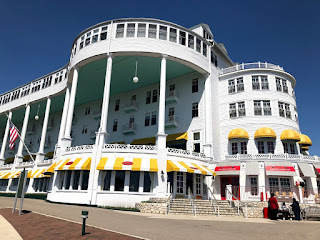 The Grand Hotel on Mackinac Island


The Grand Hotel is a stately place for excitement to happen on the island.  Every year the hotel recruits employees from around the world to work for this impressive hotel during the summer season.  What an exciting place this would make for cozy mystery mayhem.


In doing our research regarding using this island as a possible backdrop  for our next Grandmothers, Incorporated adventure, we took a horse and carriage tour of the island and the tour guide mentioned that there were places on Mackinac that were haunted.  Bingo!  That stoked the imaginations of Evans and Rhodes! Of course we went to the island library to find out more about the spots that might be haunted on the island and the librarians informed us that the whole darn island was haunted.  One of the librarians had even lived in one of the old haunted apartment buildings!


What more is there to be said? The ladies of Grandmothers, Incorporated more than likely will end up invading Mackinac Island in the near future. We just don't know when!
Posted by grandmothersinc50 at 8:13 PM No comments:

Book #3 in the Grandmothers, Incorporated series

Book #2 in the Grandmothers, Incorporated series

Book #1 in the Grandmothers, Incorporated series

grandmothersinc50
L. Barnett Evans is a novelist, playwright and award-winning storyteller who appears regularly in venues across the country. C. V. Rhodes is a prolific author of romantic suspense novels and an awarding-winning playwright whose work has been produced in theatres throughout the United States. Together these marvelously mature writers are the co-authors of Grandmothers, Incorporated, a hilarious cozy mystery novel about three sixty-something widows who create havoc as amateur crime fighters. In 2010 Evans and Rhodes’ play based on the same title enjoyed an off Broadway run. Their Grandmothers, Incorporated book series includes, Saving Sin City and There's Something Wrong with Miss Zelda. Contact them by e-mail at grandmothersinc50@yahoo.com